Welcome back! After back to back promotions we now find ourselves in League 1 and our trophy cabinet also ever growing. We are way ahead of mine and the boards projection and expectations. We are massively over achieving but what an amazing couple of seasons we have had. Credit to all the boys that have played their part in our journey so far. Just a little note on how much we are punching above our weight, last season the income for clubs in League 2, the top team Cove Rangers had something around 100k income where we were around 1k! Nearly 100k difference at the same level yet we won the league and Cove Rangers finished mid table.

As I have previously said this summer you can expect some comings and goings and a few tough decisions had to be made. This has probably been our toughest summer in terms of trying to bring in players to our club. We lost out on a number of targets who chose to go to other teams, which was kinda expected as our rep wouldn’t be high enough yet. The players we have brought in I am pleased to have got in and feel they can help us at least survive at this level before we can even think about another promotion!

Let’s start with the players who have come in. We have brought in 8 players this summer, one who you may remember and was becoming a fan favourite last season..

Some pretty ‘big’ names for our level and some names many fans may recognise. As you can see we have managed to bring Michael Dangana back for another season, a young player who can continue to improve and scored 13 in 24 league games last season. Probably our two ‘big’ name signings are Sean McGinty and Omar Beckles, both join to be our centre back pairing hopefully. Both have been around the football league in England for a number of years. Sean McGinty has been playing in the Scottish Championship for the last 2 seasons. Omar Beckles has been on trial with us for the past number of months but it took us a while to agree on finances to get the deal done. Scott Cusick could become a quality player. We brought him in after he was released from Celtic and being only 18 he could be here for a while and form a partnership with either Tom Bell or Gael Bigirimana. Victor Sodeinde was a bit of a surprise signing as we went in late for him and he chose us over a number of other teams, some being from the league above. Another young player to come in and adds competition up top. Anton Dowds was another player we have brought in after he was released by East Fife where he scored 15 goals in this league last season, if he can get anywhere near that for us this season it will be a good season for him.

We have either let players go due to them not being in our plans or not being able to agree on a new contract. There are some notable players who have left the club this summer. In a couple of cases players have retired and in Benjamin Luissint’s case we couldn’t agree a new deal with him as he felt he wouldn’t be able to renew his work permit. Sad to see him leave as he was a player I would of liked to have kept around as back up. Dean Watson is probably a surprise player we chose to let go as he was one of those nearly players, whenever he played he never did much or contributed much to the team when he had his chance. Tam Scobbie and Aaran Taylor both became unhappy for a while last season and despite them becoming happy again we chose to let them go as as they wouldn’t be good enough for the step up alongside them being over 30. Aaran Taylor was our first choice keeper in our first season if you remember.

We managed to arrange a number of friendlies this season around our Betfred Cup group games which I will show you soon. The main aim of these friendlies was to get the new players settled in and gelling with the team as well as the getting the players back up to match fitness. Results are never important it’s about getting the players ready for the season and hoping we don’t get any long term injuries. We got Leeds United to come play at our place and although we lost 2-0 it was in front of just over 5000 fans.

The Betfred Cup isn’t something that is very high on our priorities but I feel we have a better chance this season than the teams we were drawn against last season. We have teams that are beatable this time around.

Game 1 – Stenhousemuir – A good start to the group as we sat top after the first game. Craig Thomson put us in front from the penalty spot inside 10 minutes. A relatively easy game for us. Jordan Alexandre made it 2-0 just before the half hour mark. Botti Biabi made it a nervy few minutes as he pulled a goal back for them just before half time. Boris Melingui got our third in the second half  before Victor Senduinde came off the bench and got his first goal for the club.

Game 2 – St. Mirren – A strong performance from us and we did well to take the lead early in the second half after we probably just edged the first half. Boris Melingui put us in front when a shot from Sam Jamieson is parried in to his path to put away in to an empty net. It looked like we were going to cause a mini upset until the last few minutes when they scored 2 in 5 minutes to turn the game around. Benni Smales-Braithwaite and Kyle McAllister getting their goals in the 86th and 91st minutes. A fairly even game against a better side and despite losing in injury time we can take some positives from our performance.

Game 3 – Airdrie – Airdrie took an early lead but we managed to turn the game around in the second half and come away with a 3-2 win. James Hughes put them in front before Jordan Alexandre levelled the game up before half time. We were quick out the blocks in the second half as Sam Jamieson doubled the lead with a finish at the far post. Jordan Alexandre got his second of the game just after the hour mark before Aaron Dunsmore pulled a goal back late on for a nervous ending.

Game 4 – Ayr – What a crazy game. This game had everything from goals and drama to a comedy moment. We took the lead just inside 15 minutes through Michael Dangana and near instantly Ayr levelled the game back up. Our work got a lot harder as Sean McGinty was shown a straight red just before half time for a late tackle. Despite being a man down we took the lead again straight after half time when a long ball from Jamie MacDonald to Jordan Alexandre as he cuts inside and hits a hits a rocket past the keeper. We then had another player sent off as Tom Bell was shown a second yellow card. Despite being down to nine men we got our third as Michael Dangana and Jordan Alexandre closed down a back pass to their keeper who had a bad poor touch and then slipped leaving the goal open for Michael Dangana to tap home. Ayr then had a man sent off themselves as Sam Roscoe was shown a straight red for a challenge on the halfway line. Aidan Wilson got their second of the game in injury time as he headed home from a corner.

We managed to somehow do well in this group and qualify for the second round after finishing second in the group. Possibly an easier group than last season which is a reason why we did so well this year but still wasn’t something we was expecting to get out of. A near unbeaten group stage with St. Mirren the only team to take points off us.

Our reward for getting out of the group is an away trip to Scottish champions Celtic. No doubt that is where our Betfred Cup journey ends but hopefully we don’t embarrass ourselves and hopefully we can get some decent money from the game to help with our finances. 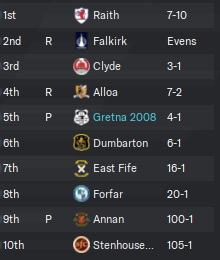 I feel we have got a side who can do well in this league. They currently have us as 5th favourites for the title which is slightly surprising considering the team we have and the other teams in this league. The likes of Falkirk and Raith are always going to be the favourites for the title this season as both are good sides and have been in higher leagues in recent seasons.

We have been drawn away to Rangers Reserves in the Tunnock’s Caramel Wafer Challenge Cup Second Round, say that when you’re drunk! It will be a tough game as Rangers will still have some quality players in their reserve side but we will go for it and see how we do and hopefully we can progress further.

The team hasn’t really changed this summer despite the number of players we have brought in, a number of them are young players who come in as back ups and to add depth to positions we needed. We are still in talks to bring another 1 or 2 players in as we still lack depth in places like right back. Our line up for the start of the season looks like this…

As you can see most of the squad is the same as last year with exception to our centre back pairing who are both new signings. After losing all but one of our centre backs over the summer. Tam Scobbie, Scott Robertson, Benjamin Luissint and Ashley Neto all leaving although Scott Robertson stayed on after retiring and becoming our Under 18’s manager. Jordan Alexandre is a player who joined us when we were in the Lowland League and he has gone up the leagues with us and he is still putting in performances at this level.

We have three players in our side who are 30 or over which shows we are a team that likes to build younger sides and have players at our club who we can help develop and improve while we improve as a club and rise up the leagues. The ‘OAPs’ of the team are Craig Thomson, Danny Carmichael and Jamie MacDonald. We may have to think about replacing them in the next couple of seasons.

Thanks for reading and I hope you are enjoying our journey. What are your thoughts on our team and any of the new signings?

One thought on “S3 – Preparation For League 1”