Welcome back! Have you got over how last season ended!? Who would of thought we were able to pull of that upset and sneak in to the play-offs and then go on to win it and get a third consecutive promotion!? This summer has been an interesting one as on one hand our quality of players that we are aiming for has changed massively and on the other hand very little players that we went for wanted to join, mainly due to our rep still being so low compared to others around us.

We did still manage to bring in a number of players and I am delighted they have all come on board. You may recognise one or two of their names. We have also loaned out a few of our younger players or players I felt wouldn’t get much game time this season to try and help them along with their development.

We did also get a mention in the League 1 season review as the biggest overachievers of the season.

We have brought in a number of new signings to help improve the quality of the squad. A couple were just to boost numbers or to test the water and see what kind of player we could attract. We did manage to get Victor Sodeinde back for another season after his amazing performances towards the end of last season. We did manage to bring in two other quality strikers in in Matt Yates and Thai Duggan, both who have performed well in pre-season games. Stefan Scougall and George Williams are names some people may know of from playing at a decent level in England. Stefan was also highly rated by some when he first came on to the scene but is a player who’s not currently lived up to that hype. Ross Laidlaw comes in to compete with Jack Hamilton for the number one spot after we released Jamie MacDonald this summer.

Not that many players have gone out for money with only Aidan Connolly, Jordon Cropper and Sam Jamieson leaving for money. A lot of our outgoings are lads going out on loan for game time and help with development. During the summer we have had a number of bids come in from Premiership clubs for Steven Caldwell so he must have something about him! I was tempted to keep him in and around the first team but in the end decided he would be better out on loan and will play in League 2 this season. Michael Williamson is a player who has gone out on loan again to Airdrie of League 1, he scored 16 in 26 for East Kilbride last season to help them win the Lowland League.

We only had a couple of ‘big name’ friendlies this summer in Leeds and Newcastle who both brought a large following of around 5000 fans each. We did manage to put up fights against both sides and lose narrowly to both. A comfortable win against our affiliate Helston Rovers as we win 13-0. A couple of surprising wins against Carlisle and Dundee as well which were also at home.

This is probably the first season we have a good chance of doing well in the Betfred Cup as we play teams on our level or below. East Kilbride should be one of the easier games after their promotion from the Lowland League last season.

Game 1 – Clyde – A controlling performance from us and George Williams on his debut got the opening goal. Connor McLennan whips a ball in from the left and George Williams is in the 6 yard area waiting to tap in the opener. Thai Duggan seals the win late on as ball over the top from George Williams and allows to him to be one on one with the keeper and tucks it in to the corner.

Game 2 – East Kilbride – Matt Yates puts us in front in the opening couple of minutes when he heads home a George Williams free kick. East Kilbride get a somewhat shock equaliser as Omar Beckles can’t clear a cross and Blair Williamson is open to put it past Jack Hamilton. We are back in front early in the second half as Ryan Leonard curls a shot from the edge of the are past the keeper. Matt Yates gets his second when he closes down the keeper and forces him into a mistake leaving him free to roll the ball in to an empty goal. Cameron Harper makes it four and gets his first goal for the club as he runs on to a free ball and fires it past the keeper at his near post. Thai Duggan makes it 5 late on when Gael Bigirimana finds him in the area before he cuts in a curls it round the keeper. Blair Williamson gets his second for East Kilbride after Cameron Harper miss times his tackle and Blair Williamson slots the ball past Jack Hamilton.

Game 3 – Ayr – We take the lead early on and got slightly lucky as a shot from George Williams hits the post and Connor McLennan is following it up to score in to an empty goal. Matt Yates doubles our lead when a cross from George Williams is missed by the defender and Matt Yates is able to fire past the keeper from close range. Connor McLennan gets his second of the game when he heads home a cross from Tom Bell at the back post. He then completes his hat trick after Michael Sparkes is played in on goal and squares it to Connor McLennan to score.

Game 4 – Livingston – A really dull game and we did well to hold Livingston off for nearly the whole game. The game finally came to life when Livingston took the lead in injury time in the second half through Steven Lawless. A couple of minutes later and we were back on level terms as a shot from sub Calum Gallagher deflects off the keeper and trickles over the line taking the game to penalties. They went on to win the penalty shootout 4-2

We somehow managed to finish top of the group and technically went unbeaten and only losing one game on penalties.. After progressing from the group stage we will now come face to face with Rangers at home in the Second Round. We faced them last year in the Scottish Cup and only lost 3-2!

I know I said this last season but this season really is the toughest we have been in not only in our time here but in the current clubs history. We will have to be on our A game every week to try and pick up points and keep our survival for this season. The board are aiming for a relegation play-off fight so anything above that will be a success this season and we can build on from that. I feel we have a side good enough to survive and hopefully the lads can prove that. After also playing well against Livingston and Ayr it shows we are capable of playing against the good sides the season. They also strangely have us currently as finishing above Inverness who have been a regular side in the Premiership in the past. 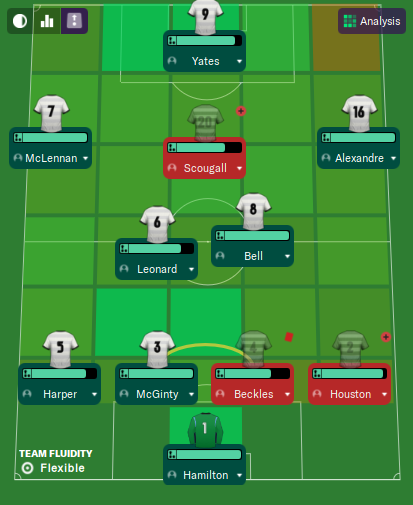 This is probably our strongest line up and how we will try and set up this season, it is something that we have been working on for the past season and has also worked well in pre-season and the Betfred Cup. Our lineup has stayed mainly the same with around only 4 of the new players coming straight in to the starting 11 with Matt Yates, Stefan Scougall, Cameron Harper and Jordan Houston coming straight in.

We are also one of two teams in the Championship that are still a semi pro side with Arbroath being the other side which puts us a a slight disadvantage. We now kick off the season away to League 1 champions Raith before our cup game against Rangers.

What are your thoughts on our new signings? Do you think we can survive this season? Thanks for reading and I hope you are enjoying the journey.